The rise of the Madiran appellation owes a lot to Alain Brumont, whose ambition and perseverance have set a successful example to his peers. Coming from a wine-producing family, who own Château Bouscassé in the same appellation, Alain Brumont acquired Montus in 1979, and replanted the vineyard himself, producing his early vintages with such basic equipment that he was ridiculed by neighbouring winegrowers. However, success was immediate and he decided to make a dry white wine as well, under the Pacherenc-du-Vic-Bilh appellation. Now also the owner of Bouscassé, he endeavours to maintain standards at both his properties, whose wines are much appreciated by lovers of epicurean delights. Sustainable agriculture techniques with a minimum use of pesticides are applied to the 90 hectares dedicated to red wine at Château Montus, and the harvests are entirely manual. The wines are vinified traditionally in stainless steel vats and then aged in oak barrels (50 to 100% renewed depending on the wine) for 14 months, resulting in exceptional density and smoothness. The château currently produces three red wines: Château Montus, Montus XL and La Tyre, the Montus-Prestige cuvée was abandoned in 2004 in order to improve the quality of Château Montus. Mainly made from Tannat, the wines are powerful and tannic, but also elegant, developing splendid aromas of blackberries, cherries, liquorice, cloves and spices. Very pleasant when they are in their early youth, they also have a fine capacity to improve with age.

Montus-Prestige: All wines from this producer

Montus-Prestige: All wines from this producer 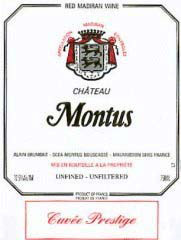 100% Tannat
This is probably the cuvée that has most significantly contributed to the worldwide renown of Madiran’s local grape variety, Tannat. Marvellous. All prices