General :
The «bio» designation covers certified wines produced by biodynamic or organic methods, sustainably produced wines, and «environmentally friendly» wines that are not officially certified.
These designations apply to recent vintages (the date of certification, if known, is specified in the estate description).
See the blog article for more information on this designation.

Organic :
The «organic» designation covers all estates certified as using organic methods, as verified by one of the bodies approved by the Ministry of Agriculture, such as Ecocert.
This designation applies to recent vintages.

Natural :
Wines which are produced without any added sulfur (or almost any) and with no other inputs. However, given that there is no official body to issue the natural wine label, it is based on winemakers’ statements.
This designation applies to recent vintages. 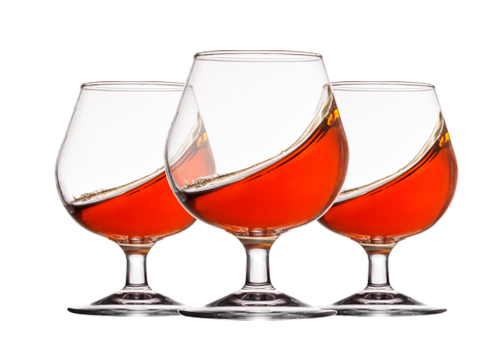 Cognac is a French spirit that holds protected origin status (Appellation d’origine controlée in French or AOC). This means it can only be produced in a precise geographical area which covers approx. 75,000 hectares (290 square miles) in the Charente-Maritime region of western France. It is an alcohol produced from the must of fermented grapes (wine) which is then double distilled in a copper still. It is then matured for a long period in barrels, before being blended or released as a vintage. The Cognac trade is entrusted to half a dozen important Cognac houses. It is one of the finest products produced in France and is exported all around the world.

The origins and history of Cognac

Cognac is a brandy, meaning a spirit produced from distilled wine (like Armagnac and sherry). It is also referred to as an “eau de vie” in a wine context, but most importantly it was the first brandy to establish its name (in the 17th century), most successfully in the British market. From the beginning, Cognac was always considered a product for export. It was first exported to England where it is still popular today, and from the end of the 16th century, the Netherlands began importing. A hugely important maritime and trading power at the time, the Dutch saw demand growing for wine spirits, especially from France and Spain and took advantage. It was the Dutch who introduced the distillation of these wines directly on site, in Charente, as there were conservation and transport problems (the wine was spoiling in transit). The first barrels of eau de vie distilled in the region were exported, complete, in 1549. From the 17th century, the distilleries in Cognac began to stand out from other local varieties. It was considered to be of higher quality (because the wines had a very pleasant acidic base); it also coincided with the development of barrel-aging which clearly improved the quality of the spirits. Cognac became good enough to be tasted by itself, without having to be diluted with water. Standing out from the crowd, Cognac was growing rapidly in England. The term "coniack brandy" first appeared in the London Gazette in 1678. Until the middle of the 19th century, Cognacs were consumed quickly, without taking the time to let them age. In the years that followed, increased demand led to a much larger area being planted, which led to overproduction and a collapse in prices (in 1877, 280,000 hectares were cultivated, compared to 75,000 today). Phylloxera (disease) resulted in the destruction of 85% of the planted in about fifteen years. The vineyards were replanted with American rootstocks, favouring the Ugni Blanc grape variety and the best terroirs. In 1936, the AOC designation came into law and protected the appellation. After the Second World War, Cognac did well in the years known as the Les 30 glorieuses or “30 Glorious Years”. Of course, this led to an unsustainable boom in the vineyard, which the market could not fully absorb, and has never fully recovered to peak levels. Today, the Cognac industry is highly regulated and structured, the number of producers has drastically reduced, and production is concentrated in the hands of a few very large houses. The four largest groups, Hennessy, Rémy Martin, Martell, and Courvoisier count for more than 70% of the market, buying directly from the winegrowers. Today, the United States is the biggest importer of Cognac. It is both a mature market and has also been heavily invested in by the Cognac Houses. The high level of cocktail consumption in the US also makes Cognac an attractive import. East Asia represents another big export market for Cognac (China, Singapore, Hong Kong, South Korea, Malaysia, Taiwan, Thailand, Japan). Today, there is renewed consumer interest in the drink among younger American consumers and cocktail lovers.

Where is Cognac made?

Located north of the Bordeaux vineyards, the Cognac region, which covers approximately 75,000 hectares (290 square miles), is divided into six tightly defined geographic denominations where the grapes are grown, known as a Cru: Grande Champagne, Petite Champagne (NB these two premier crus have nothing to do with the Champagne region, nor sparkling wine), Borderies, Fins Bois, Bons Bois and Bois Ordinaires. Grande and Petite Champagne, Borderies and Fins Bois are the most famous Crus; their soils are generally quite chalky. 40% of Cognac production comes from Fins Bois. The most used grape variety is Ugni Blanc, followed by Colombard and Folle Blanche. A total of eight grape varieties are permitted in the production of Cognac.

How is Cognac made ?

Cognac is a brandy or an eau de vie made from wine. That is to say, a distilled spirit made from grapes. The base wine is extremely acidic with a low alcohol content (approx. 8-11%). Cognac is double distilled in traditionally shaped Charentais copper alembic still. The first heating produces the Brouillis which contains about 30% alcohol, before being heated again in a process known as "La Bonne Chauffe". The result, which cannot be greater than 72% alcohol content, is then separated into different batches: the heads (first condensate) and tails (ends of condensate), the seconds and the heart. The heads and the seconds are separated to be redistilled. Lees may or may not be included. The brandy is then matured in oak barrels (often from the Tronçais or Limousin forest) for at least two and a half years and often much longer. Part of the liquid evaporates - the "angels’ share" - which allows the barrels to be topped up. The alcohol content must then be brought down to 40%: the brandy loses 1% alcohol content every year for the first five years then 0.25 thereafter. Distilled or demineralized water is added to until the desired alcohol content is reached (40% vol minimum). Cognacs can be vintage, but in the majority of cases they are blends of different years. The age of the Cognac is aligned with that of the youngest eau de vie that goes into the blend. The blend is carried out in vats, then the Cognac is bottled.Some different categories of excellence are :
- VS (Very Special), the youngest eau de vie in the blend is at least two years old.
- VSOP (Very Superior Old Pale): the youngest eau de vie in the blend is at least four years old.
- Napoléon, XO (Extra Old), Extra ou Hors d'âge: the youngest eau de vie in the blend is at least six years old, and ten years after 2018. Many of these categories are in English due to the influencer of Cognac’s principal export market.

Thanks for signing up to our newsletter! A weekly digest of wine industry news, upcoming events, food and wine pairings, auction highlights and more - straight to your inbox every weekend. Of course, you can unsubscribe at any time.