Vines were already growing here in the 15th century in an area known as Pujau, on the site of the current Château Haut-Bailly. In the 17th century, the property was acquired by two Parisian bankers, Firmin Le Bailly and Nicolas de Louvarde, who were both creditors of the previous owners. It was the first who gave his name to the château.

In 1872, Alcide Bellot des Minères bought the land, on the advice of Monseigneur Bonnet, the archbishop of Bordeaux, and built the existing château. Within a few years this entrepreneur and highly competent wine producer had raised Haut-Bailly to an exceptionally high standard. The same family, today represented by Véronique Sanders, has retained control of the property, even though it was purchased by an American, Robert Wilmers, in 1998. Substantial investments followed in the vineyard, winery and cellar room.
Haut-Bailly's vineyard benefits from a magnificent terroir, consisting of sandy soil mixed with gravel, on a subsoil rich in fossilized stone. Perfectly drained due to the slopes, the vineyard is managed traditionally, and ploughed, as in the old days, without the use of any herbicides.

The vineyard still has some very old vines, with a wide range of varieties, dating from the period after phylloxera, that include Cabernet Franc, Carmenère, Merlot, Malbec, Petit Verdot, and Cabernet Sauvignon. Yields are intentionally reduced: after manual harvests, there are several sorting operations in the vineyard, on reception at the winery and then again on a vibrating table after the bunches have been destemmed. Vinification is carried out with separate vats for each plot.

Château Haut-Bailly: All wines from this producer

See all lots of Château Haut-Bailly on sale

Château Haut-Bailly: All wines from this producer 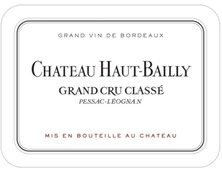 65% Cabernet Sauvignon, 25% Merlot, 10% Petit verdot
A harmonious, supple wine, with remarkable complexity, still affordable. One of Pessac-Léognan's best-kept secrets... but for how much longer? All prices