Established in Champagne since the 16th century, the Henriot family has built one of the most beautiful brands in Champagne. In 1808, Apolline Henriot, the veuve, widow of Nicolas Simon Henriot, officially founded the Maison Henriot and began to market its wines under the name of Veuve Henriot Aîné. Champagne Henriot was soon appreciated by the Grandes Cours, including that of the Prince of Holland. In 1851, Ernest Henriot, Apolline’s grandson, created the eponymous brand with his brother-in-law Charles Camille Heidsieck. In 1875, they separated and each continued to manage his own brand. By the end of the 19th century, the Henriot vineyard was considerable: it is divided into the grands crus of the Côte des Blancs of the Marne Valley and the Montagne de Reims. But phylloxera then the Great War destroyed the vineyard. In 1926, Étienne Henriot took over the management and began a purchasing policy to rebuild the domain. When he died in 1957, his son Joseph took over the reins; at the same time, he became the Chairman of Charles Heidsieck and Veuve Clicquot Ponsardin. Henriot had a very particular style: the wines are aged on their sides, and only the best wines of the best vintages enter the cuvées. At the same time, Champagne Henriot buys from winemakers established in the best terroirs of Champagne: Verzy, Verzenay, Avenay, Mareuil, Mailly for the crus of Pinot Noir, Chouilly, Oger, Avize, Mesnil, Vertus and Cramant for Chardonnays. Laurent Fresnet, the Cellar Master, brilliantly perpetuates the Henriot ""taste"": fine, precise and very pure wines, predominantly Chardonnay, great aperitif wines. Henriot has indeed placed his reputation on his Chardonnay wines, jewels of the maison and regularly ranked among the best.

Henriot: All wines from this producer

Henriot: All wines from this producer

100% Chardonnay
A great Blanc de Blancs, from a blend of different vintages since 1990. A confidential vintage produced in only 1000 bottles. All prices 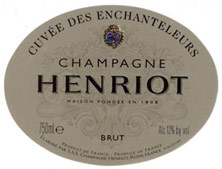 50% Chardonnay, 50% Pinot noir
Henriot's cuvée prestige,: a structured and complex Champagne that is only made from the finest terroirs and in the most exceptional vintages. Its elegance is enhanced by aromas of fresh fruit, citrus and delicate floral notes. All prices 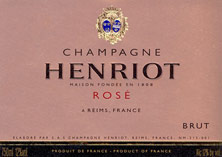 58% Pinot noir, 42% Chardonnay
A light and delicate Champagne rosé, with aromas of red berries and citrus, ideal as an aperitif, but its aromatic complexity makes it ideal to pair with a meal. All prices

100% Chardonnay
This Blanc de Blancs is the hallmark of this champagne house renowned for its Chardonnays. All prices