The property was acquired by a group of friends in 1973 led by Baron François de Gunzbung, with the financial support of the Italian Agnelli family, the main shareholders in the Fiat automobile company. The latter became the owner in 1975. Since then the property has made remarkable progress, both in terms of its wines and the innovations that have been introduced.

A member of the Union des Grands Crus de Bordeaux since 1982, Château Greysac is also a Cru Bourgeois Supérieur du Médoc, a rank that was confirmed during the revision of the classification that took place in 2012 (but without the qualification of supérieur, which along with exceptionnel has been discontinued).

The château mainly produces red wines from Cabernet Sauvignon, Merlot, Petit Verdot and Cabernet Sauvignon, but also produces a dry white wine in Bégadan, from Sauvignon Blanc. With exposure to both the north and south, the (red grape) vines are planted on gravelly soil in the hamlet of By. After very meticulous selection of the grapes, vinification is carried out entirely in barrels, and the wines are aged in wood for six months. This terroir produces charming, refined wines, with a good capacity to improve with age.

This property was purchased in 2012 by Jean Guyon, who already had other property in the Bordeaux region. The former designer owned 130 hectares of vines, including the famous Domaine Rollan de By in the north of the Médoc. This new acquisition has brought the total of his holdings to 220 hectares.

Château Greysac: All wines from this producer 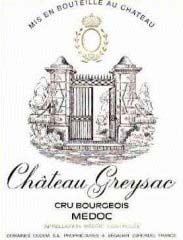 This text is protected by copyright and it is forbidden to copy without prior written consent from the author.
More information about Château Greysac
Forgot your password?