Alongside Ornellaia, Sassicaia (“the stony place” in Italian), was one of the first “Super Tuscans”, those great wines made mostly from French grape varieties, but crafted very differently from their French counterparts. This initiative, which became widespread in the late 1960s, marked the beginning of a new generation of fine Italian wines. In truth, the real history of Sassicaia goes back even further. In the mid-1940s, Marquis Mario Incisa della Rochetta, the owner of Tenuta San Guido, decided to import French grape varieties (Cabernet Franc and Sauvignon) from cuttings taken from Château Lafite-Rothschild. They were initially destined for the owner’s exclusive consumption. Sassicaia’s wine began to be marketed for the first time in 1968 by the renowned negociant Antinori, and rapidly established a reputation as one of the best wines made from Cabernet, on a par with the finest Bordeaux. Encouraged by this past success, a number of Tuscan producers began to import all sorts of French grape varieties in large quantities. This sudden competition meant that the only differentiating features were rigour and oenological expertise. Incisa della Rochetta rose to the challenge effortlessly and now its production consistently maintains its high quality. In 1983, the Bolgheri appellation was classified DOC (Denominazione di Origine Controllata), adding further cachet to a famous wine, which many enthusiasts felt to be superfluous. The powerful yet incredibly delicate wine delivers mature, elegant tannins, exquisite fruitiness, and outstanding length on the palate. Even young, it is appealing. It has the advantage that it can be drunk early, but has excellent cellaring potential, which is rare for Italian wine.

Tenuta San Guido: All wines from this producer

See all lots of Tenuta San Guido on sale

Tenuta San Guido: All wines from this producer 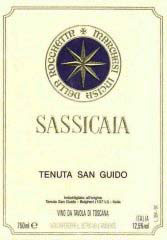 85% Cabernet Sauvignon, 15% Cabernet franc
This original "Super Tuscan" is unquestionably one of Italy's most famous wines, and has a worldwide reputation for its style, which is... Bordeaux, and yet inimitable. All prices 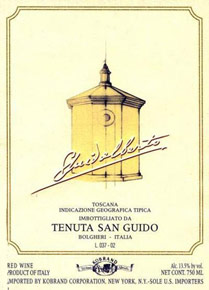 60 % Cabernet Sauvignon 40 % Merlot
A Tuscan wine to be enjoyed young: easy-to-drink. All prices 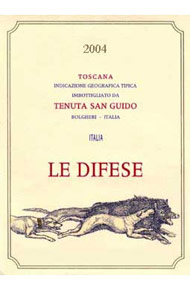